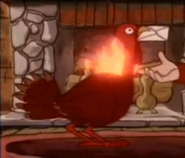 The Shermometer is a scale that Jay uses to rate the movies. In the episode, "Dial 'M' for Mother, an actor is brought in to play the role of the Shermometer. Also in this episode it is revealed that Eleanor had the original Shermometer in her home.

Star Poop is another segment of the show, in which Jay interviews movies stars.

Turkey of the Week[]

As part of the show renovations in the episode Dial 'M' for Mother, Jay is forced to create this new segment. It is not clear what this segment would've involved as the Turkey bites off Jay's toupee, which leads to a tussle, before the segment aired.

In an effort to make the show more friendly to viewers, Duke Phillips created the following bumpers to liven up the show -

Wheel Be Right Back

The following is a list of movies mentioned or reviewed by Jay Sherman on the show:

The Pride of the Yankees (Remake)

Normal appearance of the set.

In the episode Dial 'M' for Mother